with Ellen Ogden, author, gardener, chef, and co-founder of The Cooks Garden. 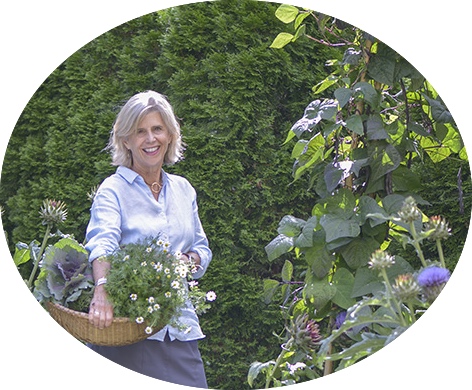 Ellen Ecker Ogden is a graduate of Hobart and William Smith College, with a dual degree in Fine Arts and Studio Arts, and studied with Marcella Hazan at the Marcella Hazan School of Classic Italian Cooking in Venice, Italy, and Darina Allen at the Ballymaloe School of Cookery in Shanagary, Ireland.

A co-founder of The Cook’s Garden, which began as a market garden and farm stand in southern Vermont, specializing in lettuce and European salad greens, for more than twenty years, Ellen wrote copy and designed the 112-page catalog.

Her kitchen gardens have been featured in Victoria, Horticulture, Martha Stewart Living and Garden Design, as well as The New York Times and Country Gardens. She has been the subject of cover stories in Country Journal, Boston Herald Sunday, and the Boston Globe magazines, and has been a guest on PBS Victory Garden, HGTV’s Garden Smarts as the Baroness of Basil.

She is a featured speaker at a wide range of horticultural symposiums throughout the US.  She is a founding member of the Vermont Fresh Network, and past member of Slow Food USA, International Association of Culinary Professionals (IACP), Northeast Organic Farmers Association (NOFA), and Garden Writers Association of America (GWAA,) Vermont Community Network (VCN) and Les Dames d’Escoffier.